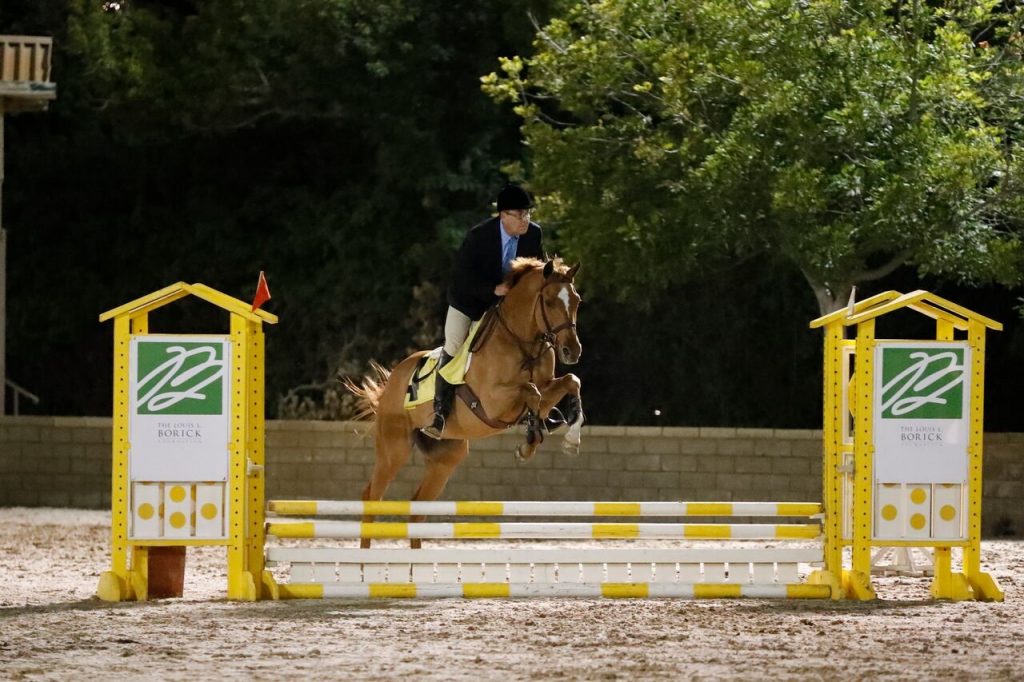 With over 100 Off-The-Track-Thoroughbreds competing in Jumpers, Hunters, Dressage, Western, Gymkhana, and Showmanship, the show was a huge success. Saturday night, the Trainer & Jockey Calcutta, a competition over a Jumper course for racetrack trainers, jockeys and TV personalities, drew a crowd of over 200 spectators.

The crowd cheered all the riders, including jockeys, some in their very first effort over fences. Others, including perennial leading trainer and winner of the Breeders’ Cup Classic, John Sadler, were experienced show jumping riders and took to the course with flawless style.

After 20 riders competed in 5 teams, the championship Team Trophy went to the Female Jockeys, captained by Kayla Stra on her white gelding, On Holy Ground. Her teammates, Kate Payeras (who won the Trophy for champion Individual Rider), Roxanne Losey, and Jessica D’Amato, shared the honors.

Santa Anita Park provided BBQ for all, and the enthusiastic crowd enjoyed dinner, drinks and a very entertaining show.

Rejuvenating the breed in equestrian sports, show draws nearly 100 competitors ARCADIA, Calif., March 28, 2019 – Much like the wild flowers of Spring, retired racehorses were in a super bloom at the Thoroughbred Classic Read more…

*Press Release Original Published on Carma4horses.org* Arcadia, CA, Dec. 12, 2018 – Not even a winter storm could wash away the holiday spirit of the Thoroughbred Classic Horse Show (TCHS), which drew more than 100 Read more…